The Trolleys of Sioux Falls

Throughout the central areas of town
Imagine a time, not too long ago, when electric trolleys rumbled through the streets of the Queen City.

Any good sized city requires transportation for its citizens. As Sioux Falls was booming in the late 1800s, several local transportation pioneers stepped up to help the people get to work, school, to the local shops, and back home again. 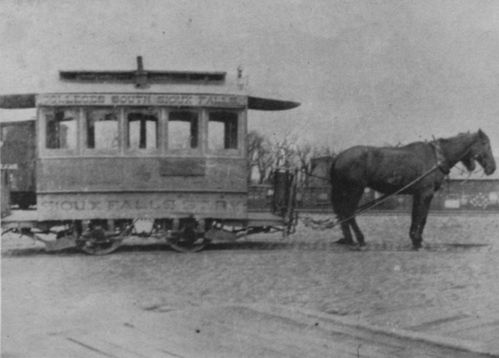 The company was never profitable and quit in the early 1890s. The drivers, who by this time owned their own teams, kept operating for a while longer and keeping the fares they made. Finally around 1897 they quit for good, pulling the cars onto a vacant lot to become play houses for children. The abandoned lines were eventually torn up.
The Sioux Falls Terminal Railroad had its first run June 18, 1889. From about 11th and Phillips it ran out to South Sioux Falls. On it's first day of operation it transported 1,000 people. The trolleys were powered by hay-burning engines. At this point I haven't found any pictures of them.
The plan was to have the line run through all the outlying areas of the city, though this was never realized. The lines were absorbed by the Great Northern Railroad and evidence of them can still be found near 26th street and I-229. These lines ran right by the former State Fair grounds which are now occupied by the oddly misnamed Cliff Avenue Greenhouse on 26th St.
The first electric rapid transit system in South Dakota was Sioux Falls' very own South Dakota Rapid Transit System or SDRT. The system opened for business in 1890 and provided transportation from just west of the 10th street viaduct to the town of East Sioux Falls. 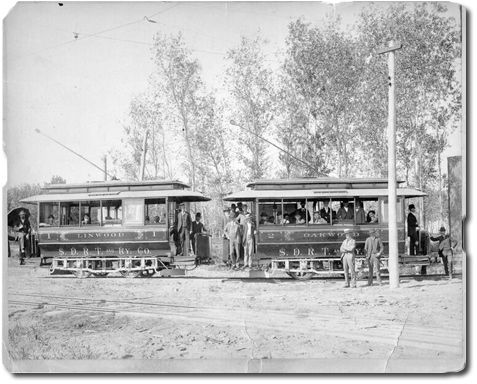 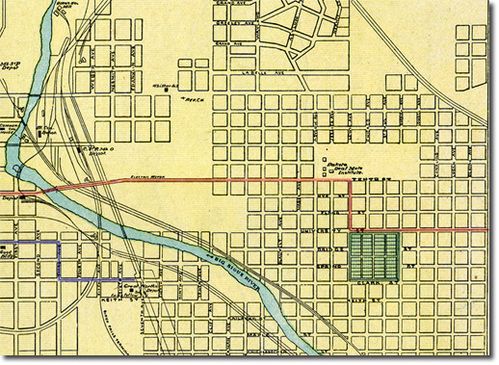 Here we see the path (marked in red) of the SDRT at least as far as the limits of Sioux Falls. Check out the landmarks along the way; The Dakota Deaf Mute Institute on 10th street, Mount Pleasant Cemetary there on University Street... Hmmm, University St. Well that's not right! It appears that 12th street on this side of town was once called University Street circa 1890. See if you can find some more streets that have lost their original names.
The 10th Street viaduct shown here in its youth was reinforced with steel beams, to help bear the load of trolley traffic.
The SDRT ran for 3-7 years, depending on whom you listen to. While Sioux Falls, South Dakota A Pictorial History says 3 years, minnehahacounty.org claims 7, citing 'Where The Sioux River Bends' by Wayne Fanebust as a source.

How ever long it ran, both sources claim the SDRT went into receivership, having never been profitable. Quarry workers opted to live near their quarries, rather than commute from Sioux Falls, which worked well to make East Sioux Falls a boom town, but it was bad for the SDRT. The only real traffic it got was pleasure seekers out for a ride in the country. 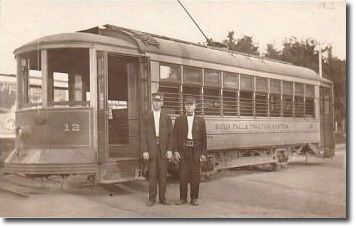 The most successful and long-lived trolley system in Sioux Falls was the Sioux Falls Traction System. The system was started by Frank Mills, the 70 year-old former owner of the Des Moines Register. The negotiations began in early 1907. By October 5th, the trolleys were running.
The Sioux Falls Traction System had a route traversing Summit avenue almost from the start. The line went by both Sioux Falls University (now the University of Sioux Falls) and the Lutheran Normal School (now Augustana). This route was also used by Pettigrew and Tate's Street Railroad. 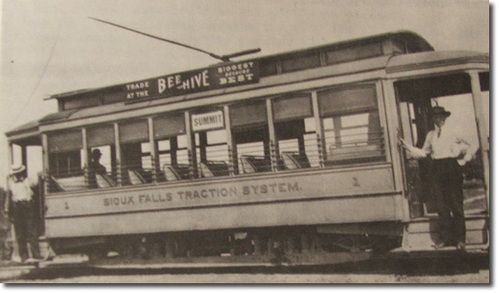 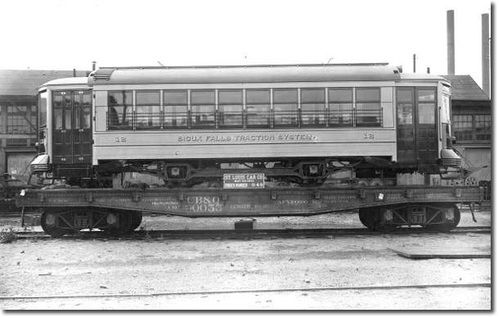 Pictured (left) is car 12, built in 1912 by the St. Louis Car Co. This brand new car still has that "New Trolley" smell.
In the early days of the SFTS, poles were put up in the streets to suspend the electrical wires above the tracks. This picture dates to around 1910. There weren't too many cars on the streets at the time to make these poles a real hazard. The electric lines were suspended from the buildings and the poles removed by 1912. 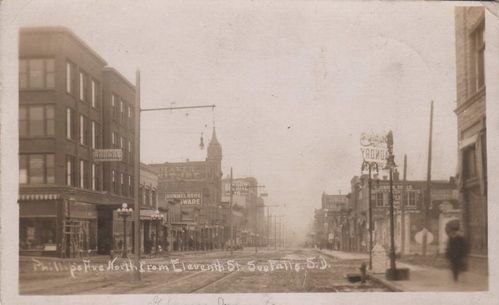 Notice the hustle and bustle of downtown Sioux Falls. The poles have been removed from the middle of the streets and you can see
the spider-web of electric trolley lines anchored on the faces of buildings and poles at the sides of the road.
This is Phillips ave., between 7th and 8th. Presently this view would show you the downtown Holiday Inn on the left-hand side of the road. I find it interesting that advertising on public transportation is not as recent a thing as I originally thought. See the primitive traffic signal and a traffic officer to operate it. 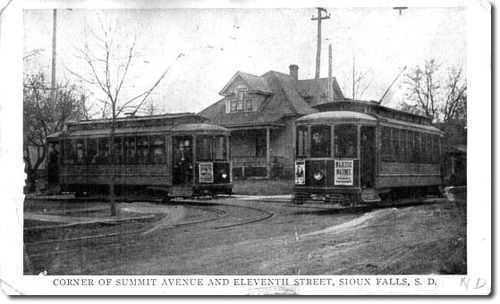 Way back when on the corner of 11th and Summit, the lucky resident of this small house could just step out the door and quickly get almost anywhere in town on the trolley. Of course this lucky resident had to listen to the trolleys rattle by at all hours as well.
Same corner, same house, no trolleys. Find your own ride, Joe and Jane Citizen! This house is on what's known as "The Loop". Teens for ages have been cruising the loop. Up until the last few years it was full of angst-ridden teens driving in circles and socializing with other angst-ridden teens on the weekend evenings. This area is still pretty high-traffic, but the fuzz has put the ki-bosh on cruising. Downtown businesses got tired of the Monday morning clean-up, and who can blame them. 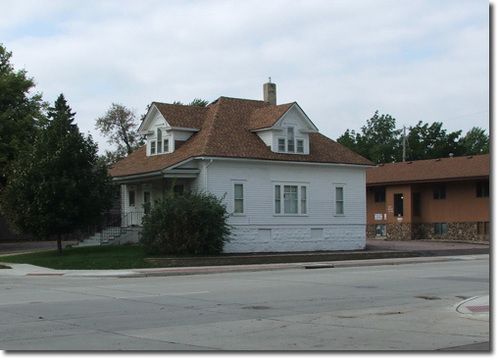 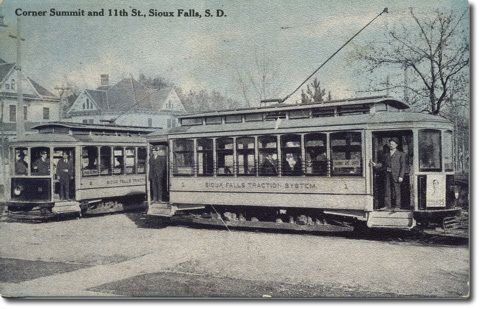 Same corner, but the photo is this time taken from the front yard of the house in the last shot. Exposing film in these days took a lot longer, so the cars are likely stationary as are the conductors and passengers.
These houses still exist, but their trees have matured greatly. This area has become a bit of a problem area for the police. There have been fights and at least one stabbing in the recent past. There are some beautiful houses in this part of the city, most of which have been converted to multi-family dwellings. It's not really a nice, quiet neighborhood, so the rents are low. 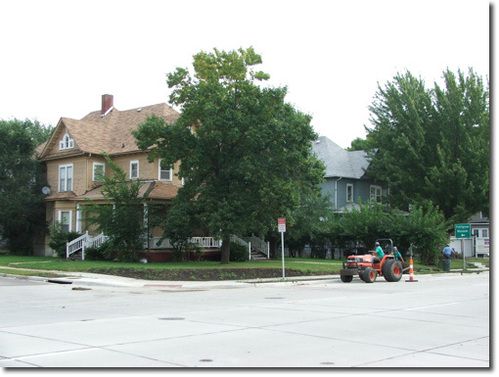 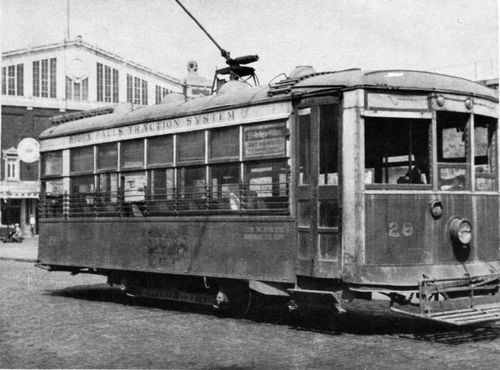 This is the last car in service in the city. On August 28, 1929, shortly after 11pm, car 28 pulled into the barn south of the Coliseum for the last time. The last fare was to Cannon's Hospital on the east side of town (more on that when I figure out what and where it was). This was shortly after the father of the Sioux Falls Traction System, Frank Mills died.
Pictured is the trolley barn formerly to the south of the old Coliseum. The cars were maintained here and kept during off-duty hours.

Trolleys nationwide were being replaced by busses and Sioux Falls' trolleys were no different. Busses could more easily add routes or improvise when inclement weather blocks certain avenues. There's certainly a lot more infrastructure necessary for trolleys than for busses. I've heard theories about big oil and GM conspiring to put an end to trolleys. I guess it's possible, but I think busses were inevitable. We don't have the eyesore of all the electrical cables above the routes, so that's good. Still, it makes me sad to know that the era of trolleys in Sioux Falls is over. We can still find traces of it in the city if we look closely. Read on! 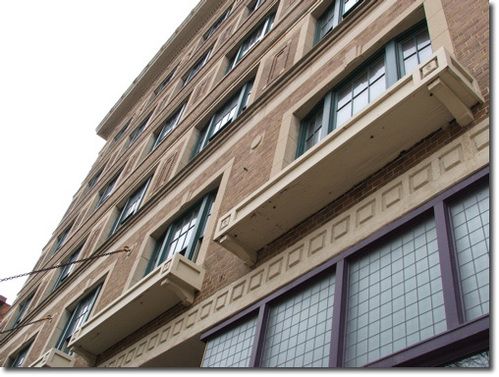 My father mentioned that he'd found evidence of the trolley system that once ran through Sioux City. There are still bits of track that lie under the pavement on the streets near his home. Some of these tracks surface as the blacktop gets worn down. I was instantly jealous. Why wasn't there evidence of Sioux Falls' trollied past? I decided to investigate. While I found no tracks poking out of our streets anywhere I did find a few bits of hardware on some of our older buildings downtown!
Here's the Carpenter Hotel. Just to the north of the entry on the second floor, there's an eyebolt. Not very telling in itself, but I found more just like it on other downtown buildings, too. Using the power of my massive brain I deduced that these eyebolts were used to help suspend the electrical lines above the tracks in the bygone days of the Sioux Falls Traction System.
Here's a close-up. A bit of an eyesore, but it tells a story that's worth hearing. The owners at any point during the last 77 years could have pulled it out and patched it over. Thankfully they were too lazy, er... historic-minded. 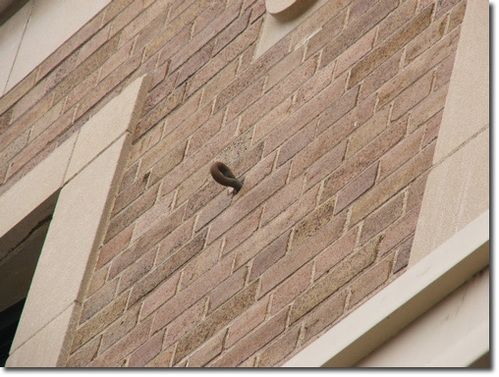 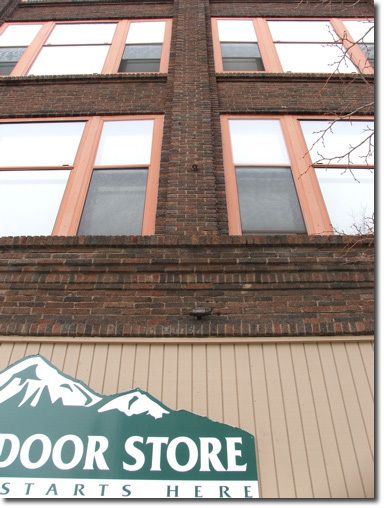 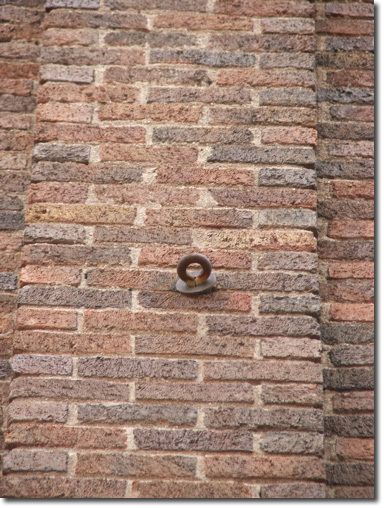 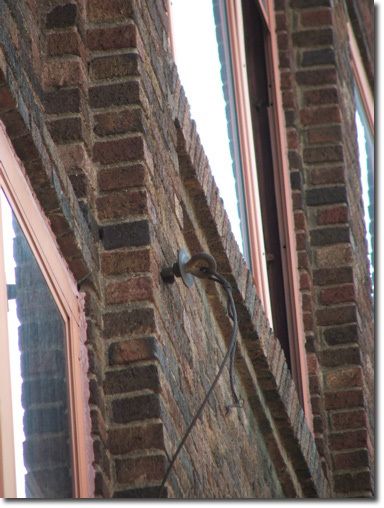 Here's the southern neighbor to the Carpenter hotel, the Boyce-Greeley building.
A closer look reveals an eyebolt above the Phillips street entrance to the Great Outdoor Store.
Here on the 11th St. side of the building is a wire remnant. Could this be part of the wire that suspended the Traction System's overhead trolley wire? Yep, I think so. 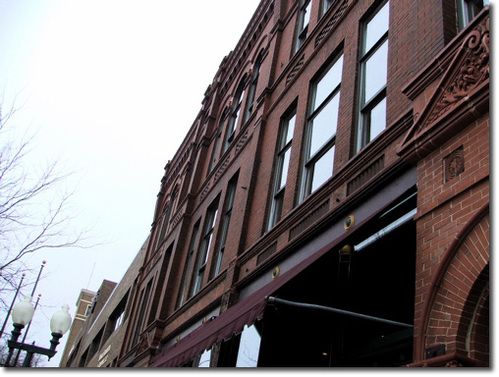 Here's the Beach-Pay building on the south side of Phillips north of 10th St. We'll do a feature on this building as well. 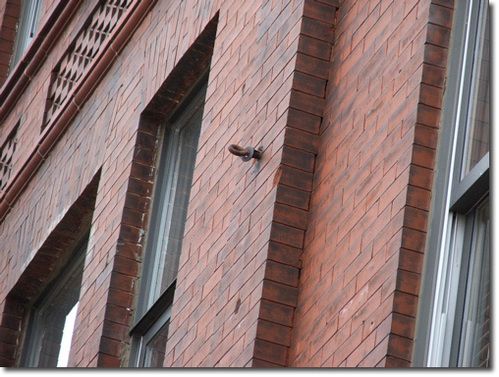 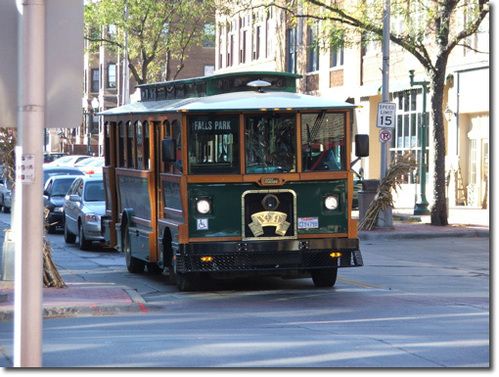 This is how Sioux Falls honors the bygone era of it's public transportation system. The Sioux Falls Trolley hits most of the major areas downtown incuding the Washington Pavillion and The Falls. It's free to ride with many stops along Main and Phillips. It's nice, but if you look closely, you'll notice it's not running on tracks and I'm pretty sure there's some sort of internal combustion engine being used to propel it.
Much of the info on this page was gleaned from:
Sioux Falls, South Dakota A Pictorial History by Gary D. Olson and Erik L. Olson
And
Railway History Monograph Vol 1 #2
available at the Main Branch of the Sioux Falls Library
The picture of the last trolley and the topmost picture on this page from Greater Sioux Falls, a magazine once
put out by the Chamber of Commerce. Thanks to Mark for providing that!
The rest of it was pulled out of my... head.