The murder of Margaret Buus

Harm William Buus was arrested the evening of November 16, 1954 for killing his wife, Margaret. He waited for her outside the Manchester Biscuit Company, where she worked as a machine operator in the cracker department. The week before, she had kicked him out of the house after an argument during which he brutally assaulted her.

The Manchester Biscuit Company occupied the building on the south side of 6th Street, just west of the Big Sioux River. Harm waited in his car for her about 100 feet west of the bridge there. When he saw her emerge from the building, shortly after 9 p.m., he called to her and pleaded with her to return home with him, saying: “Come on, let’s go home now.” She replied with: “You just go to hell. I ain’t going home with you no more.” It was at this point that Harm would later claim he went blank. He grabbed a .22-caliber automatic rifle from his car and shot at Margaret several times. The one bullet that hit her penetrated her thigh, severing her femoral artery. As she lay there on 6th Street, bleeding profusely, Harm came to his senses and realized what he’d done. He slumped against a door of the building. When two girls approached from the parking lot to the west, Harm asked them to call the police. 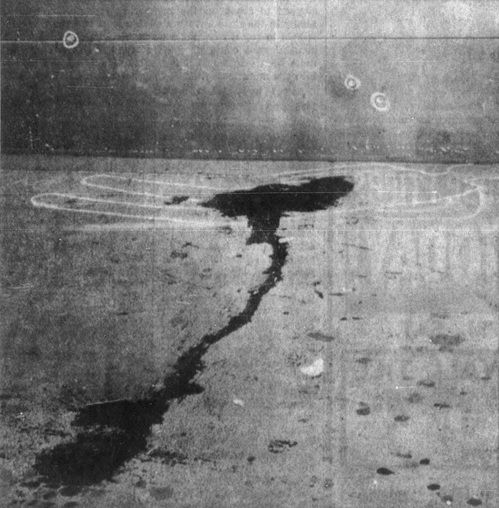 Blood trails from the chalk outline used to mark where Margaret fell in front of the Manchester Biscuit Company. Pock marks on the wall are circled with chalk to indicate where Harm's bullets struck the wall of the building. The dark splotches in the foreground came from the initial thigh wounds before Margaret fell. 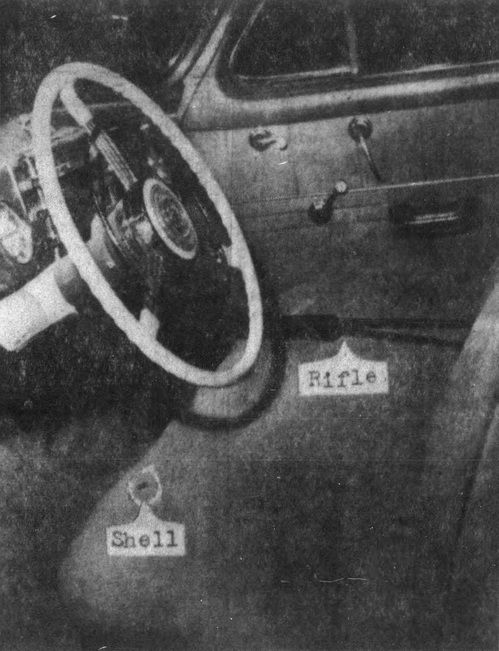 The interior of Harm's vehicle.
Harm was born near Lennox on January 17, 1914. He lived in and around Lennox for much of his life, doing farm and construction work. He met Margaret Straatmeyer, who was also from Lennox, and they were married on October 10, 1935. Their first daughter was born in 1936, and a second daughter followed in 1938.

In 1940, Congress passed the Selective Training and Service Act, and Harm, like all men between the ages of 21 and 45, was required to register. Harm and Margaret’s third child, a boy, was born in 1943, and their second son and fourth child was born in early 1945.

On May 19, 1945, Harm reported to Fort Snelling for duty. The timing was such that he received training for a short time before being honorably discharged on September 9th of the same year. The war had ended before he shipped out.

Harm cooperated with investigators, realizing he was caught dead to rights. His rage had gotten the better of him, and he had no cause to resist. The police arrested him, charging him with killing his wife. The state’s attorney, Richard M. Bielski, charged him with murder. T. M. Bailey was appointed as counsel for Buus, and a preliminary trial was waived.

The arraignment was held on December 30, 1954, with judge George A. Rice presiding. Harm Buus read a bible before the court was called to order, and Judge Rice quietly took notice. Bailey said his client was willing to plead guilty to manslaughter, and Bielski dropped the murder charge against Buus. Bailey then made a plea for leniency, saying the trouble between Harm and Margaret stemmed from Buus wanting his wife to play a conventional household role, raising kids and keeping house. He said that the four children “know that their father did a terrible thing, but they do not believe he intended to do it and are greatly concerned with what happens to their father”.

Bielski said that three of Margaret’s brothers claimed that Buus had made threats against her for the last 20 years. Judge Rice determined that there’d been bad blood between the brothers and Buus for the duration of the marriage, and their words carried no weight. Judge Rice mentioned that Buus was apparently familiar with the Ten Commandments, one of which being “thou shalt not kill”. Rice continued “You have taken the life of your wife whom you promised to love, cherish and protect and you have taken the life of the mother of your children who entered the valley of the shadow of death to bring them into the world. There is no legal justification for your act.” Judge Rice accepted his guilty plea and continued “Because of your age and life expectancy of 20 years, I will follow the recommendation of the state’s attorney that you be sentenced to not more than 25 years. As far as I’m concerned, you will be required to serve out your entire sentence”. Upon sentencing, Harm slumped into his chair, weeping into his arms. His daughters and his sister, Marian, rushed to his side to comfort him. They must have felt that, in that moment, he deserved comfort.

Buus reported to the State Penitentiary in January, 1955 and began serving his time. In 1957, his sentence was reduced to 23 years, then in 1958, down to 15 years. In August, 1959 he was released on parole, but had to return after an arrest for driving while intoxicated. He was released again by 1965 and kept his nose clean until the time of his death in 1982.