2509 W. 12th Street
On January 13, 1966 Griff's opened on west 12th street. Griff's specialized in quick, inexpensive food and hoped to have its own slice of the growing fast food market in Sioux Falls. 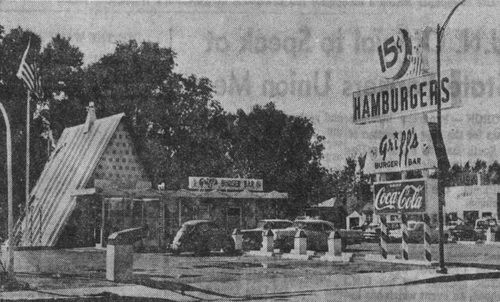 The building arrived on the back of a truck and was assembled by Swenson Construction for owners Ken Graves & Paul Ranney of Rapid City. Graves and Ranney hired Richard Olson, also from Rapid City as the store's manager.

Griff's was a young company at the time, but it was booming. The first location in Wichita, Kansas was the creation of H.J. Griffith. In a year's time he was selling franchise rights to his creation. By 1965 Griff"s Burger Bars had grown to 65 locations across the states. The distinctive A-frame buildings were manufactured by a company called Valentine, which built small diners in Kansas and shipped them across the country. 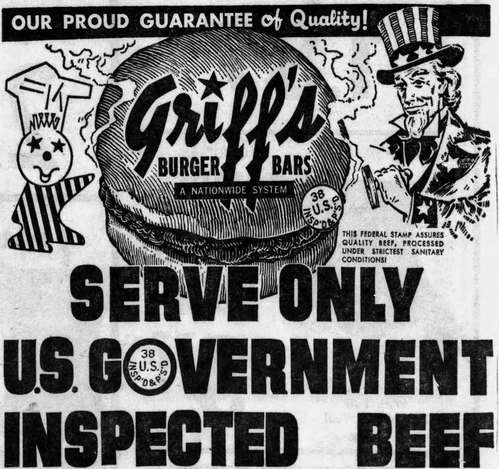 Griff's mascot was the oddly-shaped fellow to the left. He was called Griffy and he was used on the signs and in any marketing materials used by the company. As you can see, Griff's Burger Bar served only US Government inspected beef. In 1966 any meat that crossed state lines was to be inspected to ensure it fell within federal guidelines. The Meat Act of 1967 improved on this so that even meat sold within a state's borders was treated with the same scrutiny.

That's quite a value meal. Piping hot hamburger, golden brown French fries, and a triple-thick milkshake for 61¢. If anything will drive the invention of the time machine, it's value like this!

The mascot Griffy could use some sprucing up for the modern age. His eyes and mouth seem to suggest he's a little out of it. The odd modern-art peaks and valleys at the top of his head suggest he might be king of something, though it's unclear what. Certainly not burgers. That throne belongs to another creepy mascot with an immobile face. The lines farther up on what I presume is Griffy's chef hat are either a ham-handed attempt at drawing fabric lines or an alien language.

Regardless, the value shown here is clear. A full meal for less than a buck means a cheap date night. Inflation calculators say that 61¢ is equal to $7.94 in today's dollars. A Whopper value meal  runs $6.49 at the time of this writing in late 2018, and though that gets you more burger value, it doesn't account for the triple-thick milkshake. I'm also unsure of how thickness is measured in milkshakes. Is there a governing body that keeps things in order, or is this just marketing?

I tend to prattle on.

Griff's Burger Bar lasted in Sioux Falls for less than 10 years. The last ad I found in the newspaper was in November of 1970. The menu had expanded to include tacos and shrimp. It's unclear what became of the business, though the building became Jake Padilla's La Fiesta for a brief time before his death. Jake was the man behind the beloved El Matador in downtown Sioux Falls.

There are still Griff's locations out there in the US, still providing excellent quality and hoping to help you stretch your burger buck a bit further. You can find them in Texas, Louisiana, and New Mexico. Some of them still have the same distinctive building that once made them recognizable back when we had one in Sioux Falls.