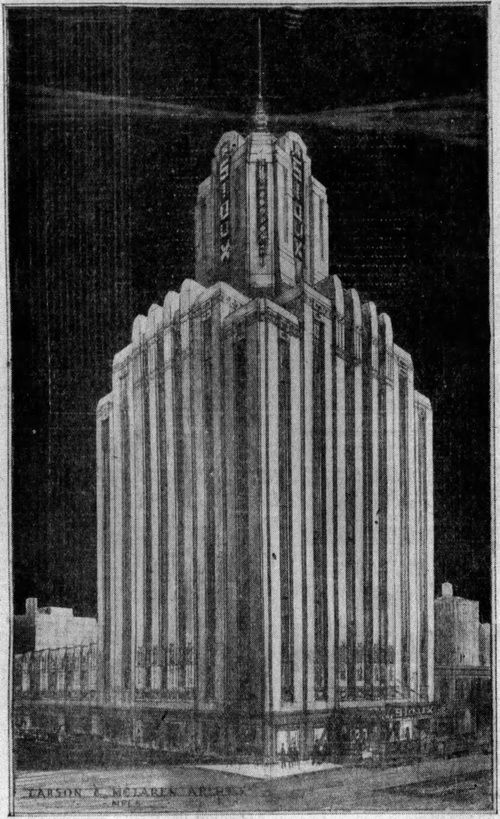 The problem was that Sioux Falls was a great place to gather, but there weren't enough quality spaces in which to do so and not enough hotel rooms for when they did. The solution proposed was the Sioux Hotel. The scale suggests the Art Deco-style building was 10-stories hight with an additional tower, perhaps for an exclusive swanky lounge or the mooring of blimps.

At the time it was proposed, America was descending into the Great Depression and finding ways to make even local economies rebound was important. The businessmen involved knew that more people coming to town meant more revenue for everyone. E. C. Olson, clothier extraordinaire was the chairman of the Community Hotel Corporation of Sioux Falls.

The project was announced May 15, 1930, about 7 months after the crash of the New York Stock Exchange. It was the kind of investment that would have found some traction with eastern investors in the time before the crash. Eastern investors at this time were likely wearing nothing but rain barrels fastened to their bodies with suspenders, if I'm to believe depictions of the depression. The Community Hotel Corporation raised as much as they could amongst themselves before turning to the public to sell shares. Each share cost $100, and an estimated $500,000 was needed to build this obelisk. A minimum of $330,000 would have to be raised and the remainder could be procured by way of mortgage. As a showing of good faith, members of the hotel corporation would not be paid until the project was finished and money earned.

A survey of business owners and Sioux Falls citizens at the time showed that at least 150 more hotel rooms would be needed to entertain the kinds of visitors desired by the local economy. The last time any significant number of new hotel rooms were built was The Albert Hotel in 1913.  The new hotel would employ at least 60 people full-time upon opening. This doesn't count the estimated 340 laborers employed to bring this modern piece of civic pride into existence. 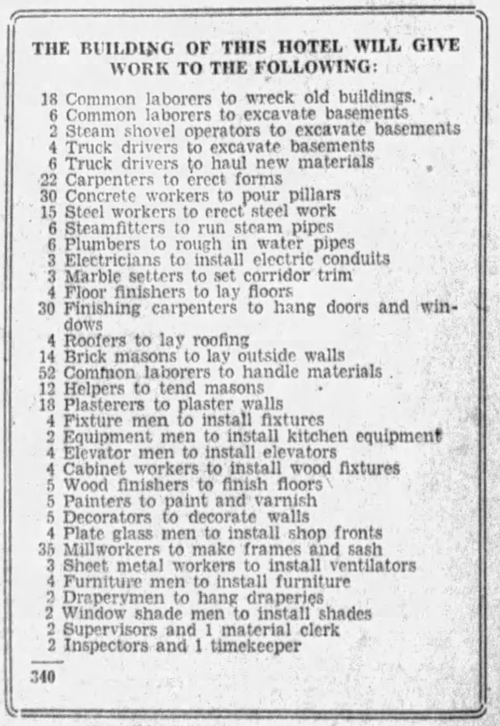 Ads began running in May, 1930 in the Argus Leader with the purpose of attracting investors. Each ad was large enough to be difficult to miss with bullet points outlining the necessity, the benefits, and the competence of the committee attached to the project.

By August, 1930 over $200,000 in stock had been purchased. By September, negotiations had begun for contractors and a company to run the hotel.

This listing breaks out the kind of work required to build the hotel, listing all different kinds of skills and trades needed to breathe life into the project. Each worker was expected to earn on average $500 in wages from the construction, which would be around $7600 now adjusted for inflation.

By early 1931, William Wilson of Wilson Storage and Transfer Co. had gotten involved. His name was larger than life at this time having just built a giant warehouse to help accommodate his thriving business.

According to president of the local labor assembly Joe Stember, there were 500 skilled workers in town without jobs. More than enough to get move the project forward. Their wages would in turn be spent in local businesses.
By February, 1931 a mere $62,000 remained between a plain old block of buildings to be torn down and a grand new hotel we could all be proud of. The reader was haunted by the image of a teamster with a wrecking ball just itching to turn the ignition and start the next phase in Sioux Falls' future.

Enumerated in the body of this clipping are 11 solid reasons for building a first-class hotel to invigorate Sioux Falls' economy. One feels bad for the less-than-optimal hotels and their place in the food chain. Imagine the traveling salesman, the way his shoulders slump when his boss tells him he's got to make a stop in Sioux Falls. He'd just gotten rid of the bedbugs from last visit. Now he's got to find a last minute hotel room somewhere in the city.

This piece lays out the differences between Sioux Falls and other communities of similar size. The intent was to bolster civic shame to rally the donations to the cause. It was the print version of the sly salesman suggesting that "Maybe this is more of a Davenport idea".

What happened to this encouraging project? Why don't we have this grand hotel at 8th and Phillips now? This is where Eugene Eppley comes in. Eppley was one of the foremost hoteliers in the United States at the time, and he owned the Cataract and ran the Carpenter locally. He owned and operated many more nationally, from Pittsburgh to Los Angeles. He lived in Omaha and they liked him enough to eventually name Eppley field after him. Eppley may not have liked the idea of the community building a competing hotel, but he also had little faith in their numbers. He was very sure that a fine quality hotel could not be built for their projected price of $500,000. As soon as he got wind of the Community Hotel Corporation's plans, he started in with his own.

Eppley proposed a grand new Cataract Hotel at 9th and Phillips, the site of the existing hotel. It was getting a little shabby anyway at the ripe old age of 29. For $1,100,000 he could raze the existing Cataract and build a new one with 200 rooms. He produced a counter-point to almost every point made by the local hotel group. You'll employ 340 able workmen? I'll employ 680!. Your paltry hotel will flood the market with $25,000 among local merchants while the hotel is being built? My grand enterprise will spread $50,000. Your local material dealers will receive $200,000 for their wares? How would they like $400,000? Eppley also suggested that the only people who would profit from the building of the 8th and Phillips hotel would be the owners of the land on which it would be built. Eppley was pulling no punches. 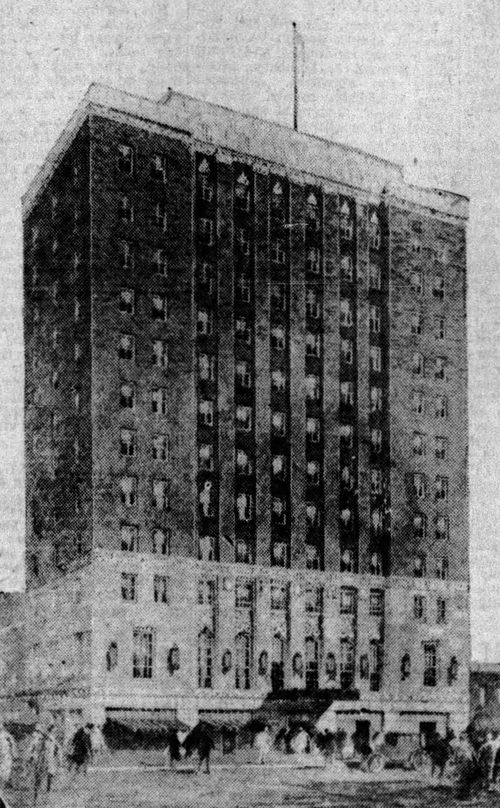 The new Cataract Hotel would need a bit larger footprint, but look at that monster!
Eppley's new Cataract, as proposed, would have 200 fresh, new rooms. The Cataract at the time of its closing in 1972 had 122 rooms. Eppley's plan adding only 78 to the grand total of hotel rooms needed in the city. Eppley answered this criticism by suggesting that 150 more rooms was more than needed at this time, and also I can always add more later. Eppley may have been correct about the costs associated with building a first-class hotel. He'd just completed The Warrior hotel in Sioux City at a cost of $1,100,000.

The fallout from this scuffle was that neither hotel was built. People lost confidence in the Community Hotel Corporation's project and Eppley's new Cataract was too big a pill to swallow. After being so close to the finish line on the first project, the endpoint was moved another $600,000 forward.

Sioux Falls did eventually get it's hotel at 8th and Phillips, but they had to wait until 1972 to get it. It was not the glorious Art Deco treasure in 1930, but it was a hotel. 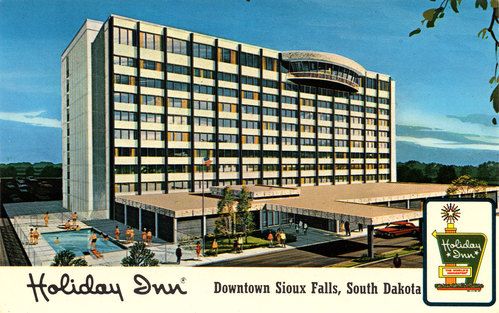