The Woman in Flats

Boyce-Greeley Building, 11th and Phillips
While working late at the Boyce-Greeley building, Jessie encountered another burning the midnight oil. 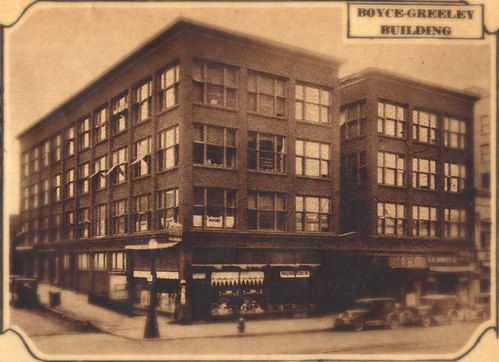 Some years ago when I was one of the editors of a local arts and entertainment magazine, we had an upstairs office in the old Boyce-Greeley Building on Phillips Avenue. We often worked late or on weekends, so it wasn't unusual for me to be alone in the building as I was on a particular Saturday night, working on a feature for the next issue.

When I was finished, after midnight, I turned off the lights and locked the office, finding my way to the elevator through the dimly lit hallway. About five or six feet to my right as I stood before the elevator was a corner, and around that corner was a wooden stairway that led to the ladies' restroom on the floor above. It had three small stalls, old-fashioned gravity toilets with pull chains, and the small hexagonal white floor tiles that were common in office buildings of 50+ years ago.

I pushed the down button and waited for the creaky old elevator to begin its ascent from the ground floor. Just then I heard someone emerge from the restroom above me and start down the stairs. They were light, quick footsteps, probably those of a girl or young woman, and so clear that I knew she was wearing flat-heeled shoes. The footsteps reached the last step of the staircase and stopped. I waited, but the owner did not appear. Perhaps she had realized I was there, and was apprehensive considering the lateness of the hour and the darkened hallway. I called out so she would know I was female, telling her the elevator was on its way and she was welcome to ride down with me.

Hearing no reply, I walked over and peeked around the corner to see the bottom of the staircase. No one was there. But I hadn't heard the footsteps go back upstairs, and no one had come into my part of the hallway. The elevator had arrived in the meantime, so thinking to myself, "Oh cool, a ghost!" I stepped inside, rode down to the front hallway and left for home.

The next time I was in the building, I asked around in various offices but no one would admit having heard or seen anything unusual at night. No one could tell me anything about previous tenants of the building, or of whatever structure had occupied that space before the current office building was erected. And it wasn't long before the owners of my company moved us to another part of town. I sometimes wonder if the young mystery lady is still there, and if she still comes downstairs at night.
If you're working or living at the Boyce-Greeley building and encounter a spooky soul, drop me a line.